It has been 4 years since my last Olympic Distance Triathlon which was the Boulder Sunset in 2011. That was the first triathlon I had the privilege of pulling and pushing Athletes in Tandem.  How fun to race a distance ¼ of what I have been training for the past 2 years 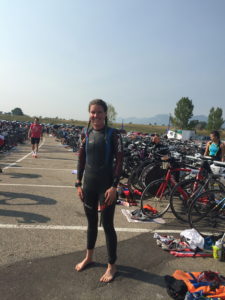 In 2011 the race started at like 1 or 2pm. This year was a 10am start and as I stood in transition I realize why, it was already getting pretty hot. I heard the announcer asking participates for feedback on the start time for next year.

Water temperature was 68 degrees. I choose to wear by Blue Seventy long sleeve helix. I would have been fine wearing my core shorts but probably would not have done a 10 minute warm up so the long sleeve wetsuit helped. I felt strong in the swim despite it being my only 3 time swimming since Ironman Boulder on August 2nd.

I excited the water about 24 minutes which is a slower time compared to 4 years ago, but faster in my age group and since I felt good I am fine with the time.

Bike course exit then on the follower of hwy 35, northbound, then east fast downhill then south on hygiene as we made our way to HWY199, westbound toe the Bouler Rex. My transitions were pretty slow.

Onto the run, my legs had some pep the first mile then I settled into was felt like Ironman pace. The buttens on my Timex One GPS wwere in lock position, so I was not getting run splits and did not know my run time till the end. I am always grateful to be running 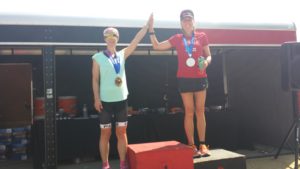 If you are looking to set a personal record in a Sprint or Olympic distance course, in my opinion, this is the series to participate in.

The Boulder Sunset has grown to be one of the local favorites, due to its later start and warmer water temperatures. With a Sprint, Olympic, Duathlon and 5K run, this nonprofit event attracts the entire community for one unforgettable day.

Finishers Medal: This was the first time I received a finishes medal for completing an Olympic Distance, despite the fact that it had been 4 years since I raced one. “Every participant of the Boulder Sunset receives a finisher medal, regardless of the race they choose to compete in.” I was a race director for 4 years and believe that is a nice touch, everyone receiving a finishers medal.

Post Race Meal Food: Quinoa was provided by Mod Market, a nice food for us Vegan Athletes. The burrito meals were purchased and prepared by the founder of Your Cause Sports’ mother. Cassie Herron has been the post-race meal coordinator for the majority of our events. 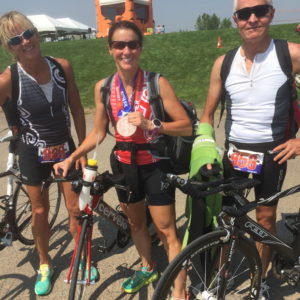 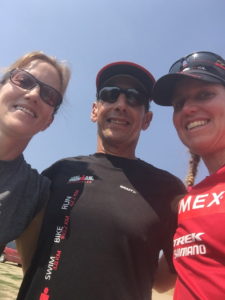 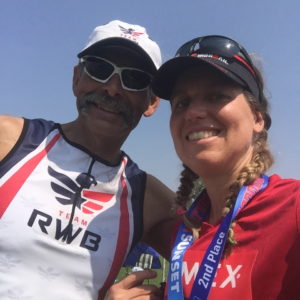 What is your favorite Olympic Distance Triathlon and why?