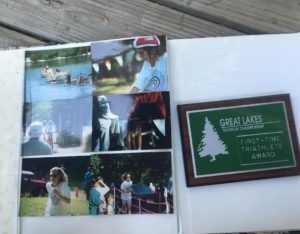 Now, 25 year later, competing in triathlon goes something like this.

Swim: I wear a “tri kit” padded shorts and tank top underneath a wetsuit or swim skin.  I believe the tri kits came out in late 90’s. Up to that point, I just wore my speedo swim suit for the entire race. I recall relying on my finish time after the event, never taking splits. Now I use a Timex GPS watch to track my racing splits. Most of the races I still exit the water first in my age group.

T1: I am usually within 1-3 minute split depending how long the run is from the lake to the transition area. The first time I remember focusing on transition speed was went I lost a race by 12 seconds. Now I run as fast as I can to my bike. While running I start to peel off my wetsuit/swim-skin to my waist. When I get to my bike I remain standing and give one big pull down from my waist to ankles, step on it to get it off my feet. In an Ironman wetsuit strippers help remove the wetsuit. I quickly put on my glasses, helmet, socks and cycling shoes, then run to the mount line with my bike.

Bike:  I only raced on a mountain bike for one season, then various road bikes for another 15 years. I started racing on a triathlon bike in 2009.  Thanks to Team Timex sponsorship, I am currently riding a Trek Speed Concept with Shimano components plus Bolle helmet and sunglasses. Cycling is my favorite part of triathlon, although compared to my competitors, my weakness.  I still get passed on the bike, not as frequently.

T2: Dismount at the line, run my bike and re-rack,  take of helmet and cycling shoes, slip on running shoes, grab my racing belt,  visor and run.

Run: While running out of t2 I wrap my racing belt around my waist and situate my visor. Depending on the distance of the triathlon I am competing in, sometimes I have fantastic runs, other times I struggle. It is just part of the learning curve and the challenge is what keeps me going.

Finish: Depending on the event and who shows up to race, I can still come across the finish line first in my age group. Sometimes first overall. No matter what placing I get, I always finish with a smile and gratitude for the ability to train and compete 25 years later.

Highlights the past 25 years.

I have experienced numerous injures, most of them within the first 17 years trying to balance training, nutrition, injury prevention and life.  No injury has kept me from biking and swimming, they usually cause me to take time off running. In 2010 I started focusing on core strength training and that has been so critical for injury prevention.

I enjoy each training and racing experience. I have the greatest friend and family support to keep me going for another 25 plus years. Do what you love, love what you do!